“The days are long, but the years are short” wrote the neurosurgeon Paul Kalanithi, as he lay dying, stricken with terminal lung cancer at the age of just 38. He reminds us that every minute matters. Every interaction is important. But how do we make the seconds we have count?

Dr Michael Fahey is no stranger to hardship, and he understands well the value of every healthy breath. In his own words Michael has led a blessed life, full of opportunity and free of illness, poverty and war.  Yet as a physician and the Head of Paediatric Neurology at Monash Medical Centre, Michael stands at the nexus between other peoples’ lives and the tragedies that can potentially change them forever. He has had to make the long walk from the trauma centre to inform a family that their teenage daughter didn’t make it. He has had to make the choice for the young man crippled in an accident, when saving a life means sacrificing a patient’s ability to walk. He has put his own heart, his own mental wellbeing on the line countless times for the sake of helping others, sometimes unsuccessfully.

“People tell me later about the shoes I was wearing when I told them bad news. They recount the way the lamp cast shadows in the corner and the noise the vacuum made outside the room. They hear the sound of the clock.”

Moments like this can break someone or, at the very least, push them to a different career. For Michael, though, they are just reminders to make every second count. For Michael, the challenges of medicine are worth it because it connects him with people, and he can share their joys as well as their burdens.

“What I realised during residency, was that what I really loved [about medicine] was the people. How lucky am I to share a fragment of life with people who moments before were strangers? Sometimes the interaction is glancing but sometimes the impact of the time we spend together is indelible.”

And of course, along with the challenges, there are moments that make it all worthwhile.

“I recall, a young girl approached me in the hospital coffee shop. She looked a lot like my youngest. ‘My mum says you looked after me when I was sick’ she said. I looked at her mother. ‘Of course. Claudia? I’m Michael. You probably don’t remember me.’ But I remember her.

“A random genetic change led to leukaemia before she was born. It is literally one in a million. But I was there. I recall the hours I fretted by her cot with her parents, counting her breaths. I can picture it now. She shouldn’t be alive… But I got to be there when she opened her eyes for the first time and smiled.”

Michael’s work eventually drew him to neurogenetic disorders such as Cerebral Palsy (CP), and this is how his path led to the Fulbright Future Scholarship. While it is a relatively under-researched congenital disorder, the impacts of Cerebral Palsy are devastating – on the patient, their family, and on society itself. It is in fact more common than childhood cancer, eating disorders, and spinal cord injuries, with over 800,000 cases diagnosed in Australia and the U.S. annually, and this number is growing by close to 10,000 every year. 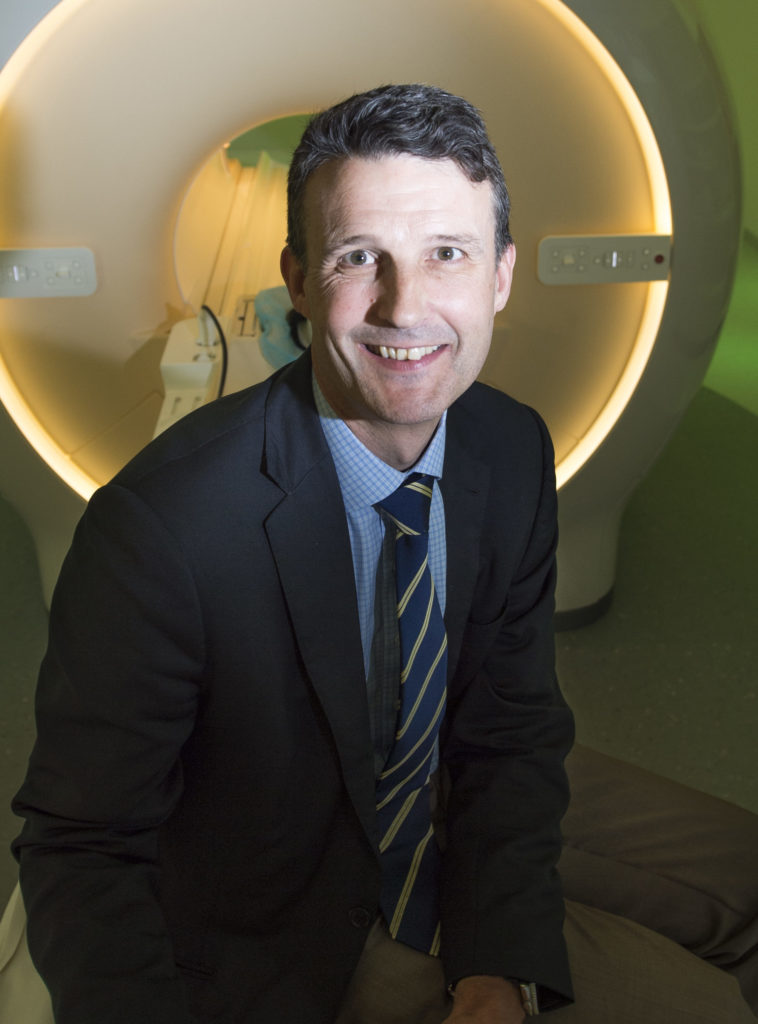 CP deeply affects every aspect of the patient’s life, often dramatically so. Three-quarters of children with CP suffer chronic pain; half experience intellectual disabilities; a third are unable to walk and a quarter cannot talk. Epilepsy, blindness, and deafness are also common symptoms. It is a lifelong condition, and its disability only increases with age. The ensuing disability and costs of care incur significant health and long-term social expenses, with an average yearly cost of over $40,000 per individual. Lifelong care, loss of income and tax revenue losses from CP cost the Australian and American economies an estimated $87 billion each year. Despite this, there are still no therapies that directly address the cause of CP.

Michael believes that a better understanding of how genetic factors contribute to medical complications can lead to improved treatment of CP, and possibly even a cure. He has been training and researching in the field for nearly two decades, amassing data, collaborative research contacts, and valuable insights into gene function.

“When I started training in the field, there was a lot of discussion about how the human genome project would change medicine. I had hoped that in my working life we could use these lessons to change the way medicine could provide therapy for people with disease.

“As cliché as it sounds, I set out with the broad idea of ‘helping people’ and ‘giving back’, without much of an idea of what that might look like. I’ve refined this idea over the years to helping people by discovering the genetic causes for inherited neurological diseases, including cerebral palsy, and developing treatments for them.”

In 2017, Michael and colleagues established the International Cerebral Palsy Genomics Consortium (ICPGC) with the aim of accelerating progress in cerebral palsy genomic research. ICPCG connects CP genomics-focussed physicians and investigators across the world, facilitating research collaborations, and providing a global shared resource for storing and accessing precise clinical data. The goal is an integrated, collaborative international network of clinicians, researchers, and advocates, all working to unlock the molecular basis of cerebral palsy using genomics and related tools. Their efforts should also serve to facilitate the development of novel therapies to improve the health and quality of life of individuals with cerebral palsy.

For Michael’s Fulbright Future Scholarship, he will travel to the University of Arizona’s Neurogenetic Laboratory to work with Professor Michael Kruer, who is at the forefront of research into genetic causes of CP. Together, the two Michaels will combine their impressive research networks to create a stronger, more integrated and collaborative research effort to discover new techniques to diagnose, understand, treat, and ultimately cure this devastating condition.

“The scope of what the Fulbright scholarship provides is boundless.

“In the short term I’ll draw more information into the ICPGC dataset from around Australia and visit sites in the U.S. to establish links for their involvement. With the CSIRO we will establish new ways of analysing MRI data to help recognise features of genetic CP. Beyond this, I plan to take this data to model how the genes influence brain development and function. That will inform new ways of treating neurodevelopmental conditions.”