Next Door to Sputnik; Alongside Armstrong in Spirit

Home>News and Events>Next Door to Sputnik; Alongside Armstrong in Spirit - Fulbright

Sputnik was launched in the early sixties. I went to Cornell University in 1965, under the banner of Fulbright, to do research into spacecraft re-entry problems. Part of our context was the moon race. For instance, I came from home to my lab to watch Armstrong’s moon landing.

Mine was just one of the contributions of many to the grand space efforts.

It is true that the money from the scholarship, along with teaching and research assistantships from Cornell University, made it possible for me to complete my doctorate at Cornell, and be a post-doctoral fellow for a year. I value that.

At the same time I value the principles that William Fulbright espoused in establishing the scholarships. In particular, I value the notion that the scholarships foster learning  and educational experiences that lead on to pursuits in the broader career of the Fulbright Scholar. There was no restriction on the Scholar’s journey. There was simply encouragement that the Scholar contribute to his or her community, and perhaps that could be in the Scholar’s homeland. 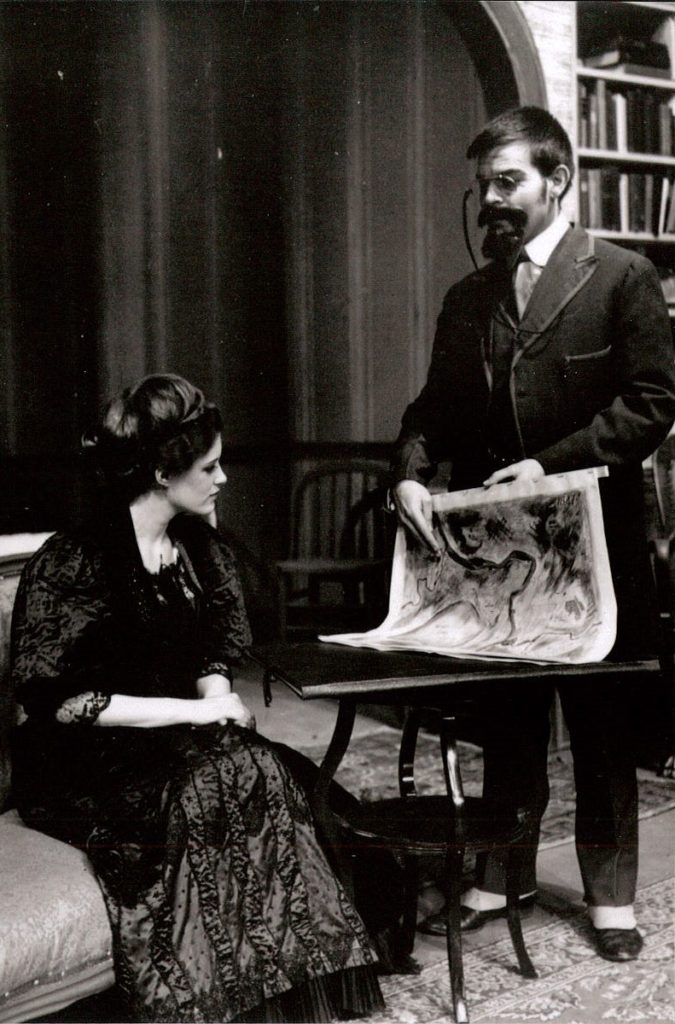 Elisa Evett as Yelena and Paul Grimwood as Astrov in Chekhov’s “Uncle Vanya” – May, 1966

I emphasise that the Fulbright Foundation was remarkably unrestrictive in the administration of the scholarships, and that  was appreciated. It is also true that one requirement placed on me in travelling to Cornell from Australia was that I travelled by train from the point of entry to the US to Cornell, close to the eastern seaboard. At the time I railed against the requirement. I wanted to reach Cornell and to get on with things there. It took me years to recognise how valuable it was to be introduced to the US community this way. I later chose with my wife to travel across the US by car. Each experience built on the other. In quiet times of reflection much later in my career, I wondered how much that trip influenced my appointment as chief executive of the Australian Railway Research and Development Organisation, and as Director General of Transport in N.S.W. I doffed my hat to William Fulbright.

1968 was a tumultuous year!  Bobby Kennedy was assassinated. Martin Luther King was assassinated—on my birthday and two days before the light of my life and I were married. About that year Afro-American students, only weeks after the disturbances at Kent State, rebelled on campus at Cornell.  Cornell, wisely in my view, chose to seek a new way forward.  They instituted a Constituent  Assembly.  In my view it was designed to release the pressure and to find a way forward for all its students. As a delegate to this Assembly—elected by my peers—I became a contributor to Cornell’s future governance. Even at the time I had no doubt that Fulbright values influenced me.

The Vietnam war was a constant in our lives. There are many dimensions, even for me. One personal one lives on. I would come down from my dorm to get breakfast at a nearby restaurant. “Two eggs over easy, toast and coffee” was my standard order. I was a regular. So, too, was Daniel Berrigan, a Jesuit priest. As a protest, with his brother, also a Jesuit, and their colleagues, he poured blood over the files of conscripts to the Vietnam War. They were nailed for it. Our conversations: “Please pass the salt, Dan”.

It was not simply a time of momentous events. Personal actualisation and fulfilment had their places. For instance, I continued developing as an actor. I felt good about being able to work with the people brought in to the summer-stock activities. It was fun to be a meat baron in one of Brecht’s plays! Sure.

And I came to have more insight into Fulbright. I give to him insight that acting, being able to bring a character to life, is immensely valuable in establishing rapport  in negotiation in any field.

I confess to a peccadello! I had neglected to alert my Professor that I was continuing with my acting. Perhaps you can appreciate my feelings when, as Dr Astrov in Chekov’s Uncle Vanya, the curtain opened and I saw from the stage my Professor and his wife. He later suggested that I had a choice to make: research or the theatre. I chose both.

My time at Cornell was, in my view, remarkably developmental for me. I do recognise that, to an impartial observer, it may appear to be remarkably mundane. Even now I smile. I think Fulbright would have been satisfied to have many whose experiences were/are as remarkably mundane as mine, thanks to him!